VFIO (Virtual Function I/O) allows PCI devices to be passed directly from the host operating system to virtualized guests. Normally, PCI passthrough is used to get neat native performance from graphics cards. Passthrough can also be used with NVMe drives, which use a PCI lane, to get near native hard drive performance. One neat aspect of NVMe passthrough is that the drive can be virtualized or booted natively.

However, there are a few required steps before Windows 7 can be booted from a NVMe drive. Linux, on the other hand, usually includes the necessary drivers and is trivial to setup in comparison.

These instructions were tested on a Gigabyte Gaming 5 with a Ryzen 1700 and a Samsung 960 Evo.

Intel's reference UEFI implementation is called tianocore. A qemu supported version of tianocore is provided in most distributions by the ovmf package. UEFI is needed to boot from a NVMe drive - BIOS implementations don't include support.

Windows supports installing drivers from disk during the operating system install. Since Windows 7 is a virtual machine, adding a driver disk is as simple as creating an iso and adding it to the VM. Fedora provides a useful disk image with virtio drivers which serves as a nice base to add other drivers.

Download the virtio driver disk from Fedora, mount it, and copy the contents to a new directory where the 3rd party drivers can be added:

Samsung's official NVMe drivers only ship as an executable that only runs if a Samsung NVMe drive is detected. There are "pure" driver files floating around the internet. If using a driver downloaded from a third party rings alarm bells, the untrusted drivers can be used to boot Windows on the NVMe drive, which the Samsung installer will detect, allowing trusted drivers to be extracted. It may be a good idea to reinstall Windows 7 after extracting the trusted drivers and copying them to the driver iso.

Optional, for Ryzen systems that will also boot natively

Windows 7 does not support Ryzen out of the box. The lack of USB support is not a problem if the installation will only be virtualized. However, if the VM will also boot natively then USB drivers need to be installed during the operating system installation.

After copying the necessary drivers to virtio/ turn it back into an iso:

From virt-manager launch the 'New VM' wizard and configure as necessary. Do not enable storage on the fourth pane and make sure to select Customize configuration before install in the final window. 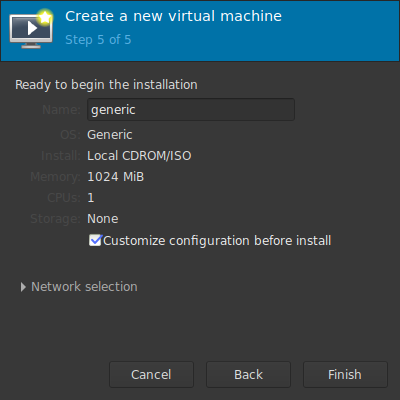 In the 'Overview' tab select OVMF from the Firmware dropdown menu. 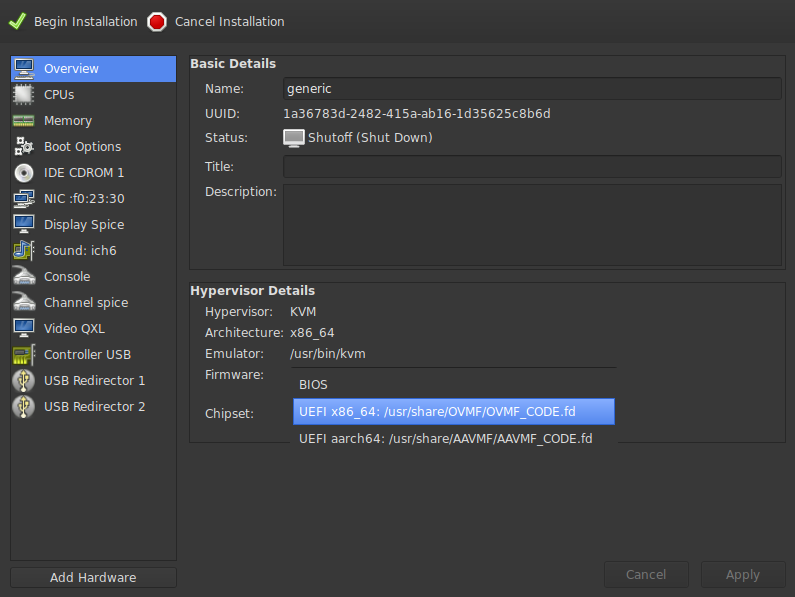 Add the boot media to "IDE CDROM 1" and use the "Add Hardware" dialog to add another CDROM drive with virtio.iso attached. It is not necessary, but can significantly improve performance, if the CDROM interfaces are changed from IDE to SATA.

Add a PCI Host Device and select the NVMe drive from the device list: 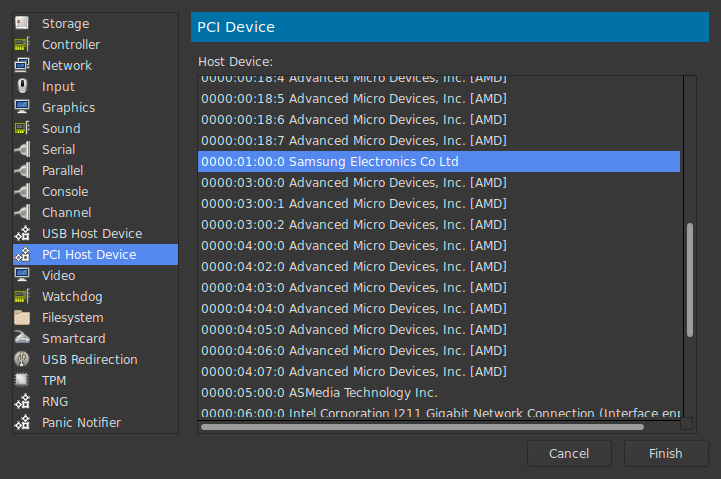 Apply the configuration changes and boot the virtual machine. If installing Linux, everything should "just work".

As expected, Windows does not find any disks: 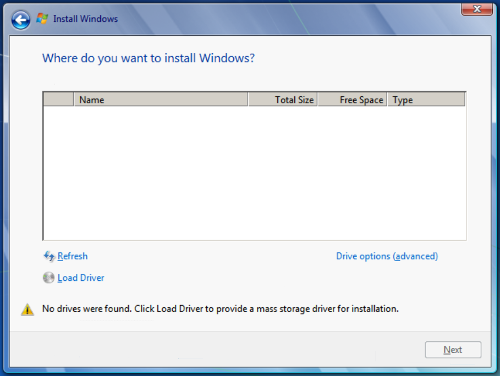 Click on Load Driver and install the NVMe driver: 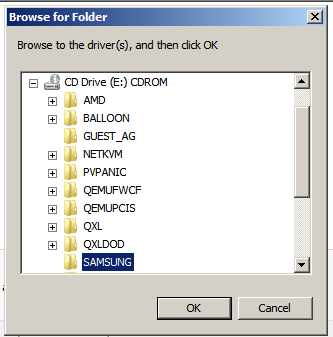 which will cause the NVMe drive (and any existing partitions) to appear in the installation dialog: 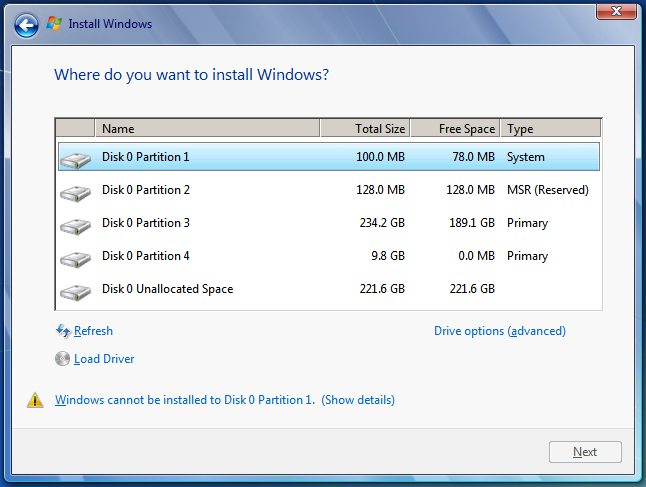 Partition as necessary and carry on with the Windows installer. When it has finished, change the Boot Options of the VM to use the PCI NVMe drive as the boot device:

Start the Windows 7 VMand verify that the SSD is functioning as expected: 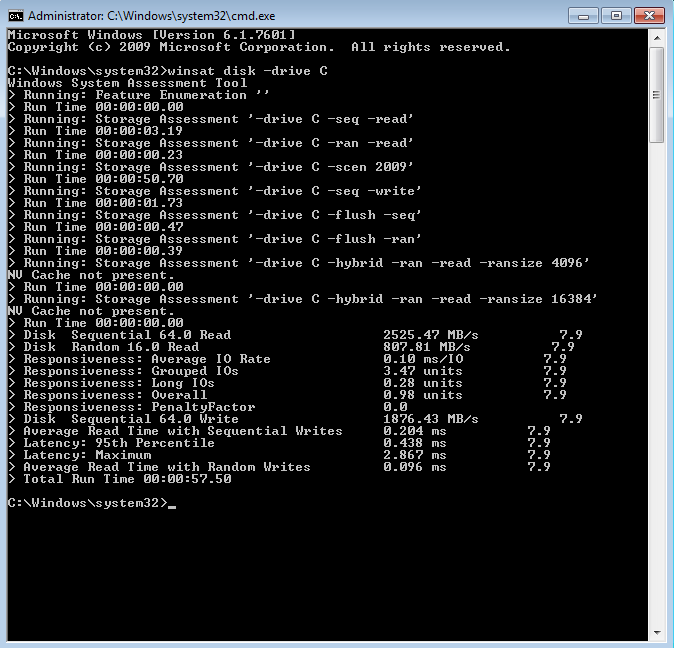 To boot natively, select the NVMe drive from the "Boot Devices" option of the host motherboard UEFI.

Do you have a lightning fast VM running on an NVMe drive? Is Windows 7 booting natively and as a VM? Say thanks and help keep this site ad & analytic free by using my Amazon Affilliate URL. I'll receive a small portion of any purchases made within 24 hours.

The air purifier marketplace is an apt metaphor for how a particle must feel while being trapped in a filter - at every turn there's a new acronym or regulatory agency or purifier type. It's enough to make someone buy the first air purifier that looks decent and is in

Ghost recently released Ghost 4.0 and with it came a "Subscribe" button and a "Subscribe" footer on every blog post. This does not match the "Just some information on the internet" blogging model of frdmtoplay.com. It is not obvious how to turn these features off, and even when

An interesting no-brand air quality monitor showed up in an Amazon search recently. The sensor is two bare PCBs with an Asair AM2120 temperature & humidity sensor, a SenseAir S8 CO2 sensor, a Plantower PMS5003 PM2.5 sensor, and a 2.8" LED display all sandwiched between two pieces